This was a fairly significant technical challenge. The first experiments where we tried to use the existing matrix switch was unsuccessful.
The matrix switch contacts were covered in some kind of grease, that probably didn't present much of a series impedance to 100 kilowatt ttransmitters, but the Rhode and Schwartz vector network analyser that Rex VK3OF had only saw it as open circuit. Undaunted, we connected up a temporary feed line to one of the PX group antennas, and Denys's NanoVNA showed it was kind of resonant at some frequency. So at least the feed line was intact and some kind of antenna was "out there".

Subsequent trials with a 50 ohm to 300 ohm balun that Denys made up with parts he managed to find at the local Jaycar worked great, so we did some more testing on the baluns. Connecting two of them back to back and measuring the insertion loss and power handling.

This is the setup for testing the power handling and VSWR, it's Denys's Codan 8525A ( that I've borrowed ) and the key is held down with an Irwin branded morse key 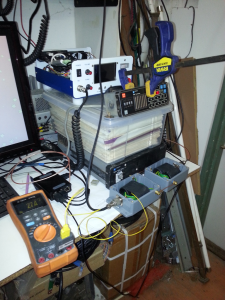 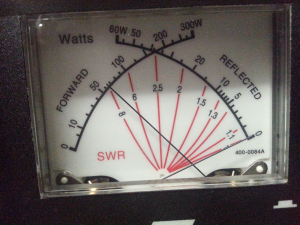 Approximately 70 Watts in 65 Watts out continous carrier for about 20-30 minutes and the temperature was monitored with a thermocouple attached to the toroids. The temperature rise was less than 5 degrees C, so with a peak to average ratio of 10-20% that means we can run 350-700 Watts of SSB all day and stay cool. Construction details of the Baluns are here https://ra.sadarc.org/#!/baluns and there is also a thread on this forum with a downloadable PDF.

Rod VK3UG setup his spectrum analyser with a tracking generator to sweep the frequency response and insertion loss.

The insertion loss Rod measured increased below 160 meters, but was flat across the HF amateur bands. Further, no undue heating was observed running 110 Watts AM carrier, which sort of confirmed the results Denys and myself had found.

So at that stage we decided to construct a total of 9 baluns, in the meantime Rex VK3OF had found a DX Engineering 50 to 300 Ohm 1KW balun, so we had sufficient baluns for three groups of three antennas per station.

We had measured out the coax lengths to each feed point and during the week I located several rolls of RG213, some from RA scrap clearance, some from Geoff VK3ZNA and some from Denys VK3ZYZ, so I measured out all the coax lengths and terminated them with solder through PL259's, and labelled them according to which array they were intended. I measured the insertion loss and ran TDR on each coax to check for lossy or damaged runs.

One issue that came up was the problem of static electricity with the large arrays, Nigel VK3DZ, noted that voltages on the curtain arrays could rise to kilovolts in seconds with wind or electrical storms, which would zap any amateur radio reciever. So as a precaution we added a ground point to each of the baluns, basically the centerpoint of the secondary is ground and common to the 50 ohm coax shield, so we ran a separate grounding wire from each balun to the grounding straps on the steel supports for the transmission lines. The people who built the antenna system at RA had installed a separate grounding stake at every single post, so we just connected directly to that. Those guys never did anything by halves, just solid engineering.

Installing the baluns involved disconnecting the links from the matrix switch and bolting the straps on the baluns to the outgoing feed line. I found some silver plated copper straps and soldered washers for the bolts to the feed line.

Denys was the only one of us brave enough to balance on the ladder and do the installation, this is about 5-6 meters high.
You can see the red grounding wire attached to the side of the balun. 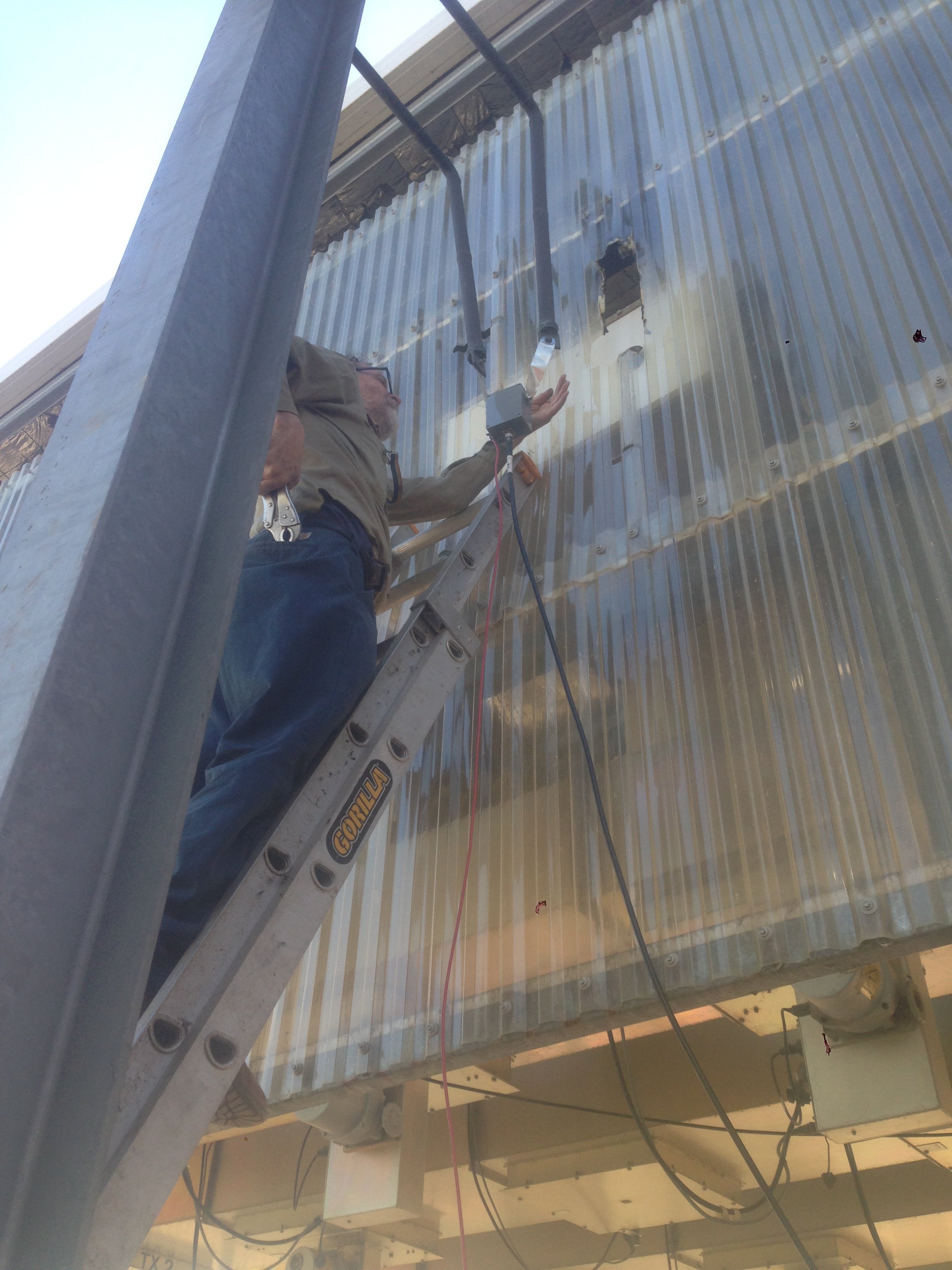 The next task was to sweep the antennas and decide which ones would be suitable for the amateur bands.

This meant sweeping all 12 antenna arrays plus multiple skew switch settings across all the amateur bands, so something like 80 or so separate data sets to generate and plot in order to decide what antennas would work and for what bands. In the process we discovered some faulty slew switches and a downed feed line on one of the J arrays. The Japanese Rhombic JR feed line was also down.

Rex VK3OF spent the better part of a whole weekend nursing a Rhode and Schwartz VNA scanning and re-scanning antenna groups. Paul VK3YLS and Terry repaired the slew switches, and Paul had a repair crew on site with heavy equipment the next morning (9am on a Sunday!!), to repair the downed feed line.

This is typical of the VNA sweeps, this is the PX3 array with the slew switches set to 50 degrees on 40 meters. 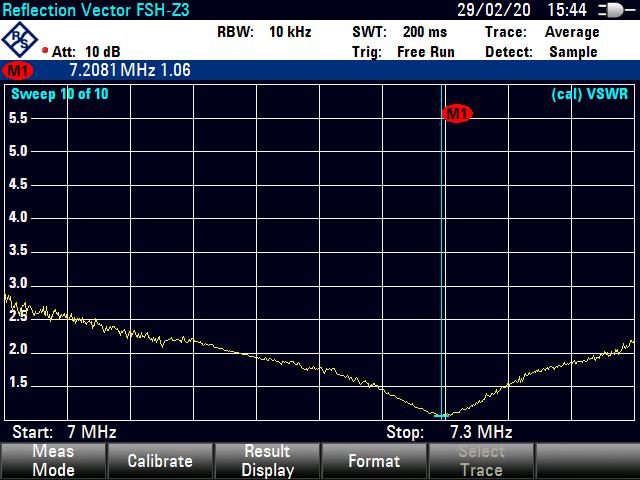 By the end of the weekend we had a mass of data and we were all starting to understand the way that the RA antenna systems worked and how we could configure them for the VI3RA weekend. With the help of Rod VK3UG and others Josh was able to put together the antenna directions ( together with the slew switch settings ) and the VSWR plots to generate charts for each antenna array. 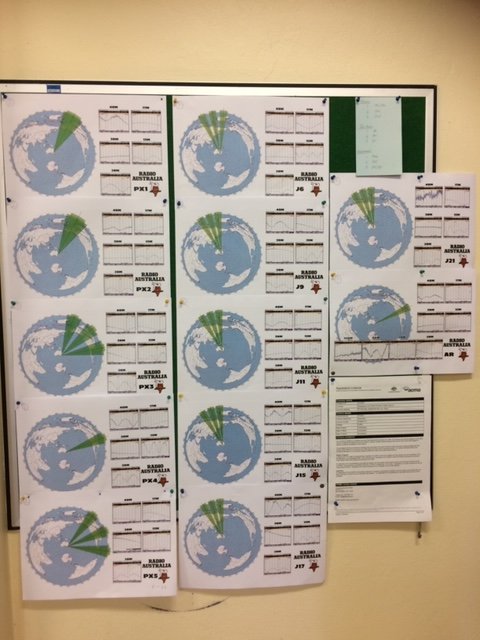 By this time we had decided to go with three operator stations and try for three antennas to be available at each location.
Rod VK3UG designed and built a switching system that would allow each operator station to remotely select from three antennas.
One consideration was the ability to control the antenna selection from inside, rather than have people stumbling around in the dark trying
to disconnect and connect coax cables. 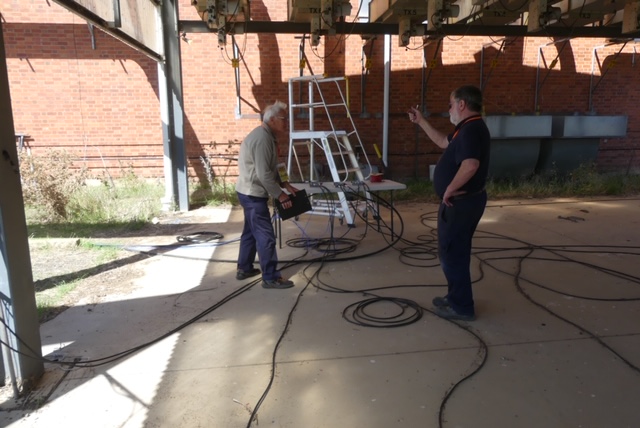 Cat 5 ethernet cable was used to connect the relay control to the switches at the operator stations.
Here are the three antenna switches that Rod VK3UG built with 3 arrays for each operator station. 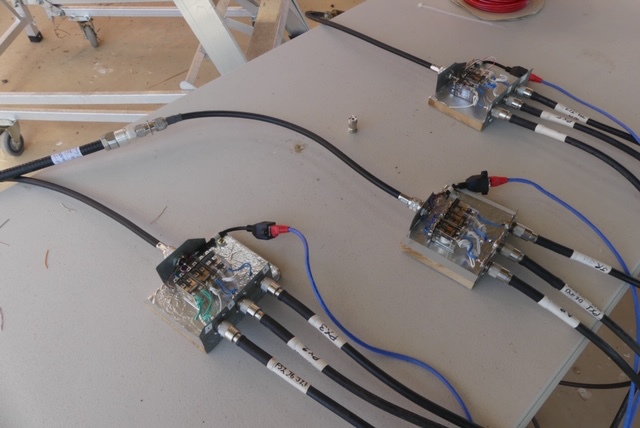 We opted for low loss LDF 4-50 for the coax runs from the switches to the operator stations.
Geoff VK3ZNA supplied the coax and terminated it we ended up two lengths of LDF 4-50 and one of LDF 5-50
The LDF 5-50 was assigned immediately to the EME station.. 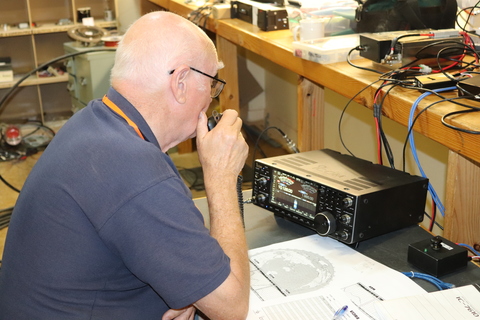 Rod VK3UG operating the ICOM 7610, the antenna switch box is on the right, and copies of Josh's antenna plots are on the desk.

It was very rewarding for all that were involved in the hard work behind the scenes that everything worked flawlessly for the whole weekend.

I think we all breathed a sigh of relief at the end of the weekend that nothing went wrong, and the antenna arrays were given the best possible opportunity to show how brilliantly a massive commercial curtain array can perform on the amateur bands. I still remember watching some guy working Europe on 80m and thinking... isn't that long path? I never found out.

Credit for the antenna system setup and control that was the cornerstone for a great weekend goes to Denys VK3ZYZ, Rex VK3OF, Geoff VK3ZNA, Rod VK3UG, Josh, Paul VK3YLS, Terry, and many others.. 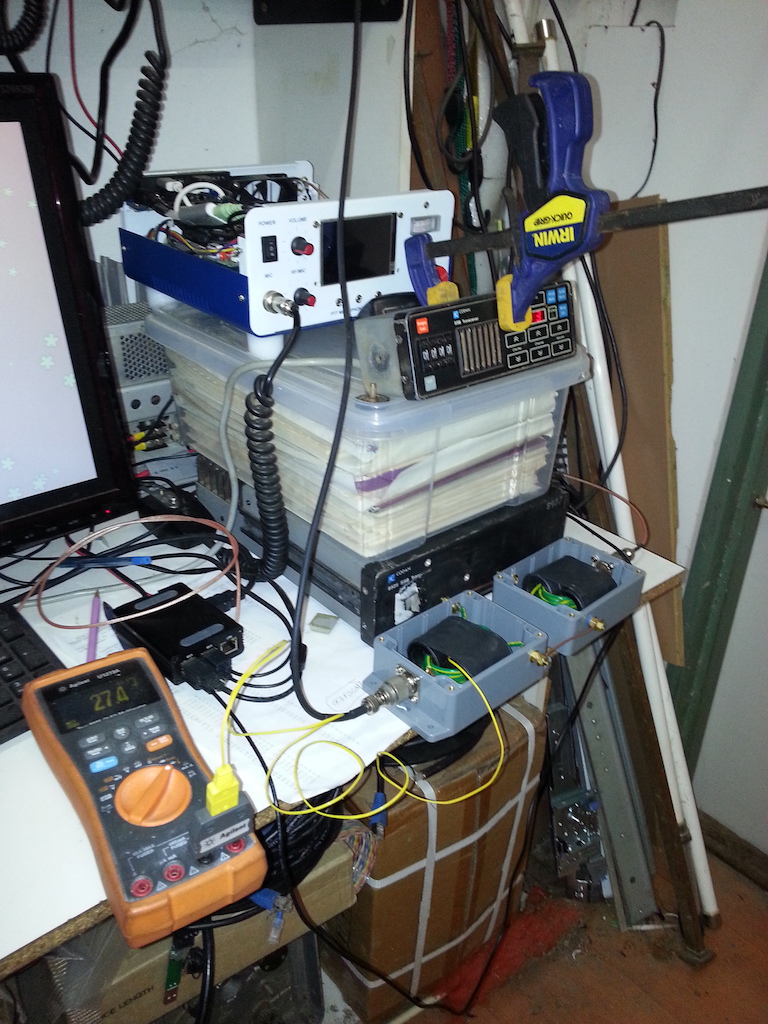 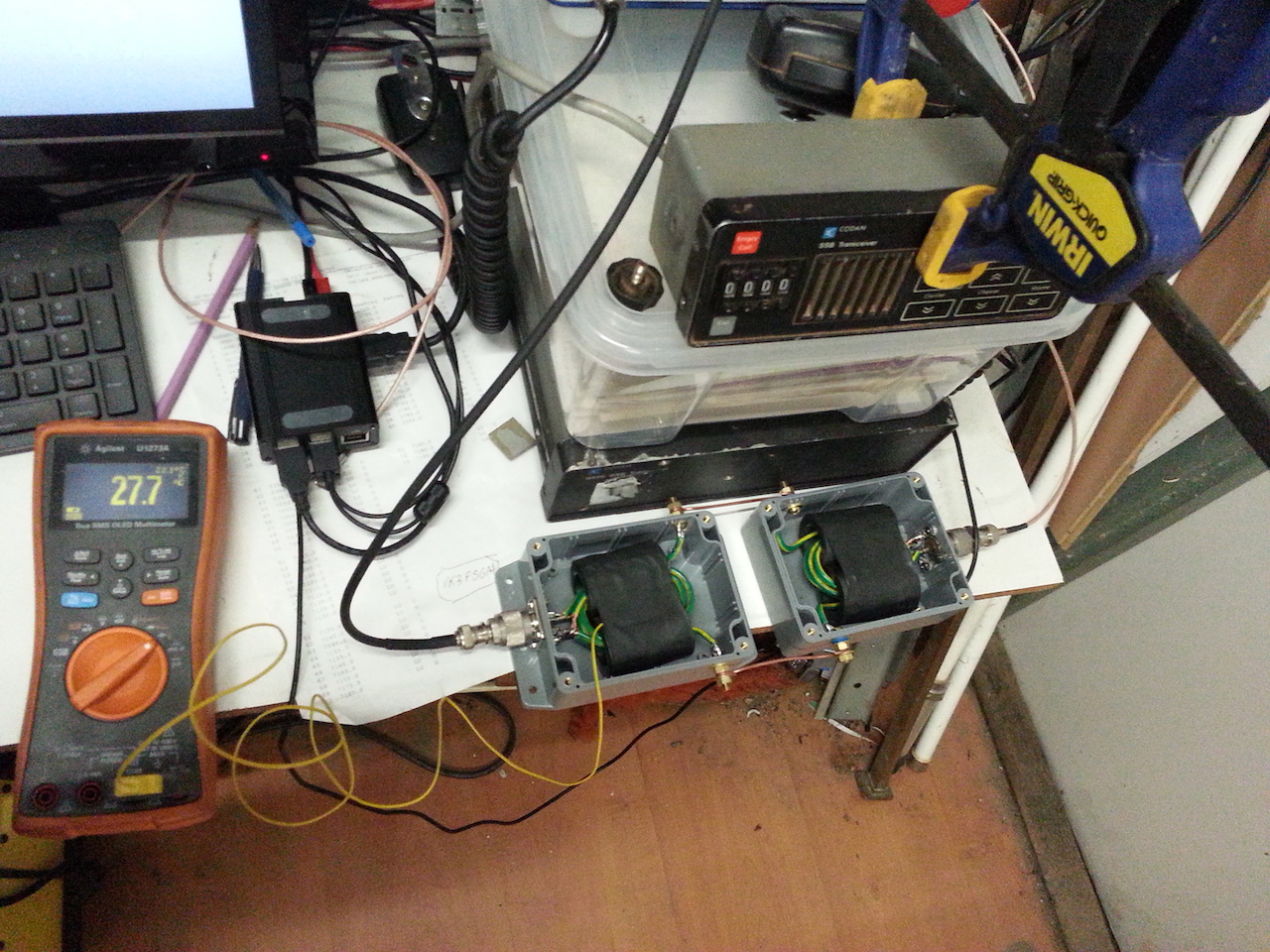 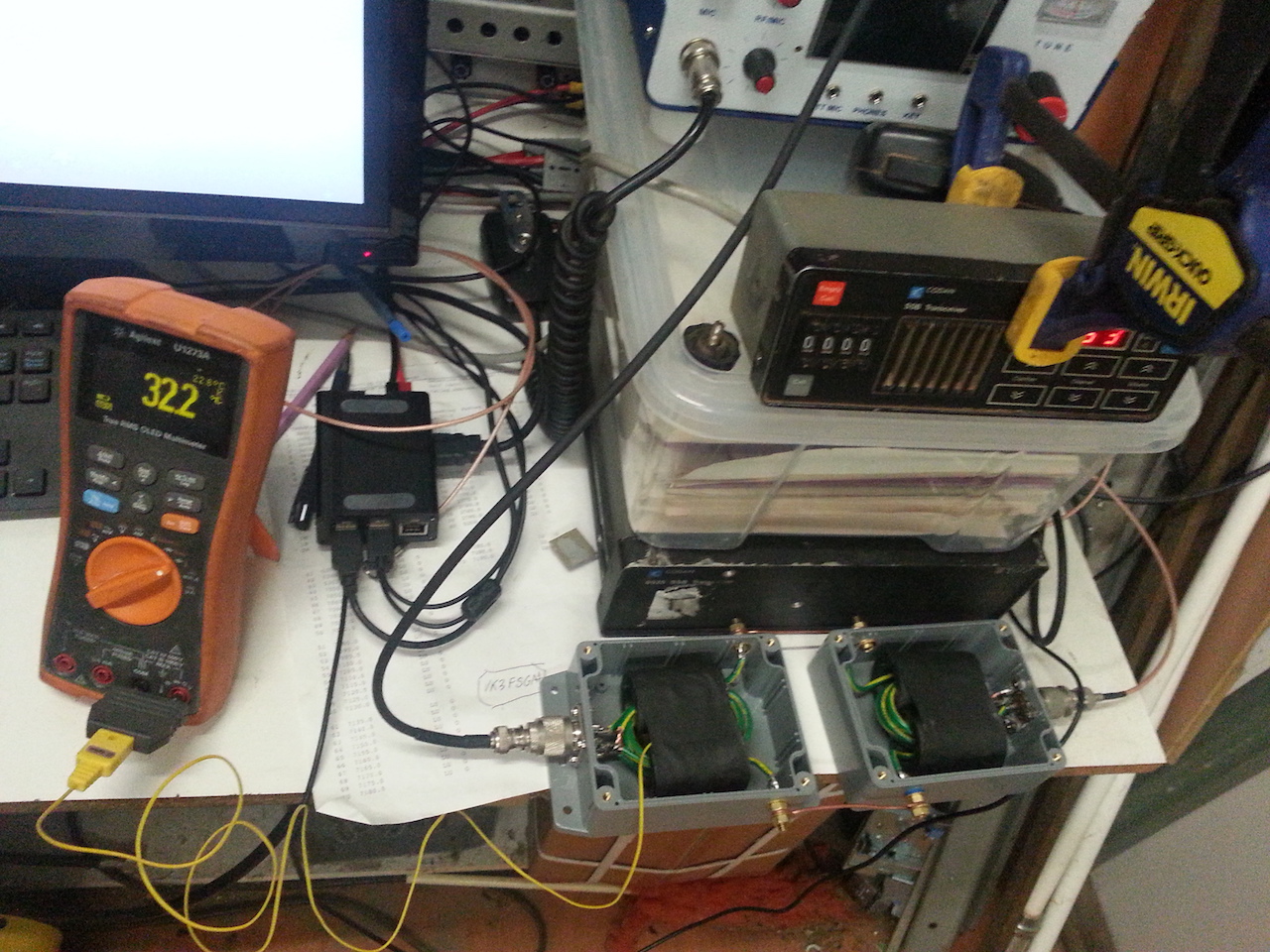 Staff member
Here are the pdf's of the antenna arrays that Josh prepared by combining all of the data from the various sources.